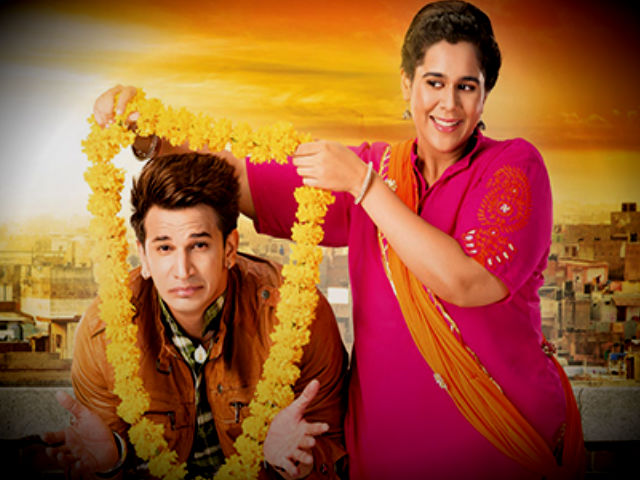 As a general rule, I keep my distance from anything on TV with the B word in it. For obvious reasons. “Bahu” instantly translates itself to- copious tears, silent martyrdom and annoyingly ideal dialogues. However I must confess that recently, a most unlikely show has caught my  fancy and it’s called Badho Bahu on &TV.

This show is about a bahu (no prizes for guessing that), a prospective one actually, ( as she is not married yet)  who is quite ostensibly, overweight. Set up in the backdrop of a Haryana village, Komal’s story (yes, there’s that paradox) revolves around her family and that of Raghuveer Ahlawat’s ( her deceased father’s best friend).

At a sweeping glance, it seems  about the impending struggles of an over sized single woman,in a constrained society that is obsessed with body images. Getting her married would obviously be a gigantic (pun intended) task. With a theme like that, I expected the show  to be ostentatiously moral in nature, trying too hard to get the “inner beauty” message across to viewers. I  also expected the protagonist to be intensely victimized in an attempt to make the viewers feel  sorry enough, for them to ignore the story-line  or the lack of one,around her. After all, over countless years, Indian television has trained us to expect the stereotypes. However, in the case of Badho Bahu , I have been wrong with all my prejudices.

Komal is  gloriously imperfect, and still the sole hero of the show. She is mostly neither sorry nor complacent about her weight. The appeal lies in the fact that no issue is made out of her size,  at least not overtly. It remains the central theme, but intertwined so finely into the story, that it crops up and down like a recurrent wave in a richer and deeper ocean of  full of parallel stories.

There is a butterfly like innocence in her character, coupled with a strong but subtle resilience towards unkind behavior. Her character is naturally humorous and  when alone, does not shy away  from indulging into daring day dreams. It is  an achievement, that the spunk given to the character is portrayed seamlessly, despite the unflattering wardrobe and minimal make up.

Badho Bahu is making a statement very silently: You are not cool because of what you wear and how you speak. You are cool because you are comfortable in your skin. Her  lack of penchant for drama, is another trait, unexpected of television leads.  Komal does not deliver long monologues/ dialogues. She observes without judgement and in-spite of being  delightfully  childlike in her heart, takes instant lead when someone around her needs some rescuing.

Without a doubt, the broad shoulders of Badho Bahu, are  carrying the show well, but it doesn’t harm to have a strong supportive cast. The male lead, Lakha or Lucky (Raghuveer’s son )  is endearing in a similar way. Part of a wrestler’s family, his focus on body building is a contrast to Komal’s fitness quotient. He makes his jabs on Komal’s weight, which are borne more out of  over familiarity rather than malice, and she lets itt go. Like a true jatt, he carries his heart on the sleeve, and falls in love with the German visitor, Marjorie, who breaks his heart and goes back

The show is at a most exciting juncture right now against this backdrop.  Jilted at her wedding because of  Raghuveer’s enmity with her prospective husband, Komal will now get married to Lucky.  Another reluctant marriage in tellyworld, but this  one holds a lot of promise. There are no misunderstandings or scheming family relatives here (at least not now). It  is going to be a marriage, which will challenge Lucky’s fundamentals of life and Komal’s rose colored glasses. It is going to be a marriage that promises  organic growth and maturity, enabling universal identification.

The show is definitely worth following because of strong story line, quality cast and it’s fun quotient ( do not miss the awkward romance between Rana &  Payal). The antics of the young crowd in Ahlawat’s courtyard, keep the tone of the show wonderfully light.

Having said that, Badho Bahu has glaring editing problems, the dubbing goes awry at times & there is a lot of screen time focused on individual  facial expressions of multiple characters, for one single event. At times, you feel like you could come back from a quick trip to the market, and  Komal’s family would still  be reacting to an event that happened a century ago.

Despite the usual flaws, the show is  currently a winning bet , because it tells a story that does not depend on big budget, flashy clothes and  a loud back- ground music theme, to make a point. It charms with it’s simplicity, just like its protagonist. And that’s already being  one step ahead of the present shows on TV.

Currently telecast at 9:30 pm on And TV- Mon to Fri

Copyrighted Material. Do Not Copy.

This work is licensed under a Creative Commons Attribution-NonCommercial-NoDerivs 2.5 India License.