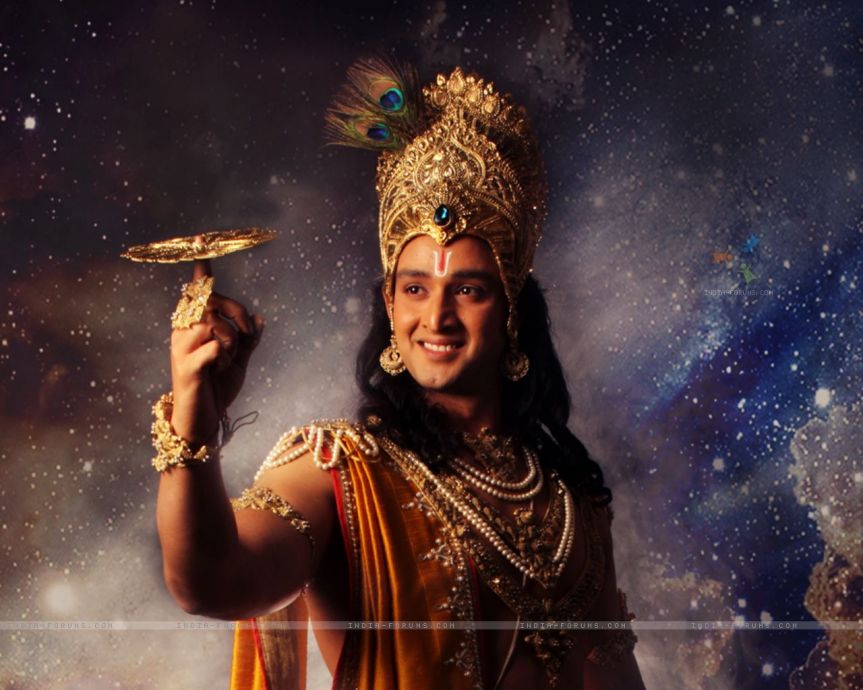 Salutations to the Lord!

And no offence but,

All these names have become synonymous to me with one person

I am not a great fan of all of his work rather I don’t know him and about his work outside Devo Ke Dev Mahadev on LifeOK and more recently Starplus’s Mahabharata. I have not watched any of his previous shows. This article is solely based on his performance as Shree Hari Vishnu.

Like every other person of my generation I too had grown up with a healthy dose of great mythological shows like Mahabharata, Shri Krishna, Ramayan and Om Namah Shivaya comparisons were bound to happen and other than the fact that the sets of Devo Ke Dev Mahadev were a picture of grandiose I didn’t find it particularly appealing.

And let me be honest here I wasn’t bowled over by anyone initially. Yes not even Mohit Raina impressed me. But still I watched it because the music was mind-blowing and well, to be honest watching this show was better than watching most of the other TV serials. A mêlée’ of saas-bahu dramas.

So here I was watching the first episode. Watching how brutally Daksh was insulting or rather trying to insult Mahadev but all that he received in return was a simple smile and immediately in that moment I felt the absence of Narayan and why he wasn’t here to admonish Daksh for insulting Mahadev.

Then came 23rd December 2011. Amidst the beautiful chanting of ‘Shantkaram ’ appeared our Shri Hari Vishnu. Eyes closed, smile on his face. Lotus in one hand and Sudarshan Chakra in another. Lying on Anantsesha. Meditating upon his loved, much adored and respected Mahadev was our very own Saurabh Raj Jain whom later we all came to refer as and very lovingly ‘Praanpriye’.

But at that moment as soon as he appeared onscreen comparisons begun in my head, from Nitish Bharadwaj to Swapnil Joshi to Sarvdaman D Bannerjee and I found him lesser than all these revered personalities. But I still remember the one thought that came amidst the nerve jarring comparisons and that was ‘smile acchi hai’ at least they got that right. What did I know that as the time will pass that smile will completely takeover and in fact become a source of joy for many.

Let me tell you that Bhagwan Shiva’s rage and and Maa Durga’s anger does not scare me as much as the absence of the ever present smile from our beloved Narayan’s face. Honest!

As the Show moved on I started appreciating it day by day. Since the show was on Mahadev, and Mohit Raina due to his uncanny likeness with our mental image of Lord Shiva as well as his acting abilities and ahem, his well chiselled body and godly good looks became the focal point of my attention.

But even after gushing over him I was still never able to dismiss the importance of Saurabh Raj Jain as Shri Hari Vishnu.

Saurabh Raj Jain as Shri Hari Vishnu created a niche for himself in the show when all the odds were against him.

The show was about Mahadev and Mohit Raina had already garnered the love and affection of the masses with his impeccable performance as Shiva like no one else, and Saurabh on the other hand to play the character of Vishnu which had already been explored so many times and had been marked with stellar performances given by great actors like Nitish Bharadwaj and Sarvadaman D Bannerjee that it was a task for him to make us notice his performance but he managed to do that with much élan. He did not disappear in the background rather he performed it so well that watching both these actors share the screenspace together became a reason of celebration for many. Perfect bromance as some would say. 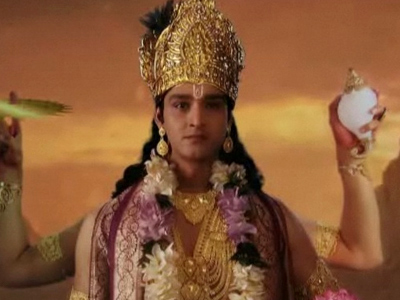 Although as I was expecting it to be, his role as Shri Hari Vishnu in Devo Ke Dev Mahadev was not just that of  Shiva’s Man-Friday and the srishti’s ‘go–to-person’  whenever the universe was in a turmoil or when Mahadev was busy being inscrutable and deliciously mystical. It was much more than that unlike the other mythological shows where the importance of other deities are downplayed a little to show the supremacy of the lead. And for that I would like to thank the production house. They maintained the balance and kept the script open for him to explore his acting abilities. Keeping the main character as the focal point but not denying the importance of other characters. Soon his nods and his smiles, the twinkling of his eyes along with slight twirling of the lotus in his lower left hand, his cryptic instructions for Narada became my favourites.

Then came the episode of Sati’s swayamvar.

When even after the whole world and his father Brahmdev’s wish to see Mahadev and Sati married Daksh did not budge even a little and when he very arrogantly and quite adamantly was dragging Sati out of the hall I knew it was time for Narayan’s interference and interfere he did. As much as I expected to see him appear all smiling little did I know that it was the day of role-reversal. There was Mahadev standing with a slightly smug smile on his face and Narayan, well was not very happy as he appeared in his virat roop and a serious face (smile absent. Yeah scary for me). And he made Daksh understand very clearly and quite succinctly that it was also his wish to see both of them married and that if he still did not give the pair his blessings he’ll find himself in a difficult position as that of his opposer.

Now here in a fraction of a second we see his skill as an actor. As soon as Daksh gives his assent he is back to his smiling self. It was not sudden but fluent. The transition was perfect and complete. I could feel that this was one actor other than Mohit who was well worth his salt.

In the episode of Sati’s immolation the apparent sadness on Narayan’s face was clearly visible. When he beseeched with Sati to not commit suicide and to think about Mahadev’s sorrow we could see that he was still trying to salvage the situation even though he knew that what was about to pass was inevitable. That knowingness in his eyes is everpresent. And when on one hand we all were waiting to see Mahadev’s anguish and anger as Veerbhadra, Vishnu’s teary eyes still managed to move me.

When Mahadev was going Ballistic on Sati’s death, he became the instrument of his and our sanity with his calm voice and serene presence.

Episodes went by and after the Sati era I started enjoying the bromance more than the romance. Their chemistry as Mahadev and Narayan was more and more strengthened with each passing day.

And then came the episode which truly, honestly and whole-heartedly made me fall for him. Yes, I finally fell for him and that happened during the much recent and much appreciated Jallandhar track. While most of the audience may remember this track for Mohit’s amazing performance in an out and out negative role and for which he received a well deserved award, I remember it for an entirely different reason.

It was for me the epic episode of Vrinda’s death.

Saurabh Raj Jain literally took my breath away. The subtlety of his performance and his excellence as an actor was completely and firmly entrenched that day, atleast for me.

I remember reading an article on him where he explained how he was briefed about his role as Vishnu by Nikhil Sinha. “Nikhilji had told me that Lord Vishnu doesn’t speak much. He just says one or two liners. He is a Supreme God and an enlightened soul who knows all. He has no worries. A smile always plays on his lips.”

But in the episode of Vrinda’s death he gave the God layers of human emotions. Perfectly balanced

When he appeared in front of Vrinda, he was not his smiling self but sad. The ability to still look her in the eyes established the fact that even after committing this act he was still a God and that there was a very strong reason behind why he did what he did.

Along with the sadness that was writ large upon his face we could also feel his predicament. Between wanting to console Vrinda, respecting her anger and accepting her rage.

His tearing eyes on seeing his devotee writhing with pain and anguish over the apparent betrayal played upon her by her revered, respected and loved diety was done superbly by this amazing actor.

Finally when Vrinda stopped, he started speaking and the smile returned. Not in its complete glory but a smile that comes on your face when you come to terms with your circumstances. And accept them wholeheartedly. 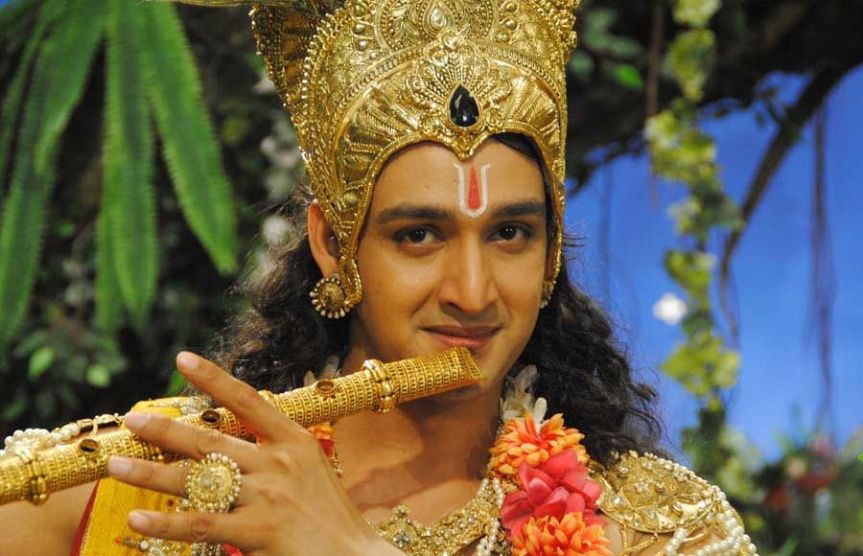 I am not lying when I say that Jallandhar’s cries of pain did not move me as much as the heavy sigh of Narayan’s acceptance of Vrinda’s curse coupled with the hopelessness of the whole situation. My heart crushed a little more with each heavy breath that he took. That the situation was equally painful for him can be experienced by the viewers easily.

And from that day onwards I truly believed that Saurabh Raj Jain will achieve greatness. All that he needed was a chance. And then comes the news of his role as Shri Krishna in Starplus’s new venture-Mahabharata.

I knew that his role as Shri Krishna in Starplus’s Mahabharat will be a treat to watch. And his first two episodes in the show have only asserted this fact.

Hopefully he’ll give me another chance to enthuse about him. And soon. Till then all the best Mr Jain and Jai Shree Hari.

If you want ot write for @TVWITHDD, Mail me at dramasanddreams@gmail.com and follow us @tvwithdd